Ahead of any building work, a total house clearance was required to make way for the owners to plan out the improvements. As a cheaper and more efficient option than hiring a skip, the client was satisfied with the price quoted and so we set a date for the job to go ahead.

Clearance Day at the Kensington Property

Go Clearance arrived bright and early on the day to meet with a family member who let us into the Kensignton house ahead of the tidy up and we set about sorting the clutter and disposing of the waste.

Initially starting downstairs, Go Clearance removed all the large furniture items checking all the cupboard doors and drawers before loading them into the van. The kitchen was also emptied with all the plates, cutlery and white goods taken out leaving just the units in the room. The Kensington property also had a large conservatory area which was full of junk including several dead plants which were removed and disposed of with no hassle.

Upstairs there were three bedrooms that needed to be emptied and the large items of furniture, including some large wardrobes which proved to be unwanted by the family and so were collated and taken to a local charity shop. Aside from this upstairs proved to be mostly items of clothing and a few small pieces of bedroom furniture that were removed for recycling.

As with most house clearance jobs, once the larger items were taken from the house it was easier to sort through all the clutter and junk accumulated within the property. Once the rooms were cleared, the owner was left with several large, tidy and spacious rooms, which when modernised would potentially make a great family home for a buyer looking to live in Kensington. As you can see from the ‘after’ photos once all the rubbish had been disposed of responsibly the house was left totally clear and ready to be tackled by the builders. 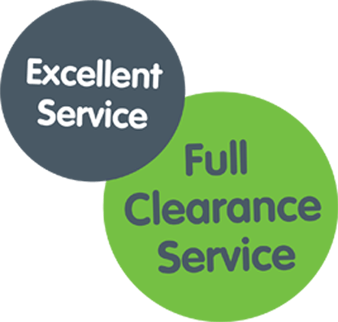